This is a family favorite. We often serve it with Brussel Sprouts.

Sautee Mushrooms then set aside, Sautee Onions until caramelized then set aside. Brown Ground Beef with garlic and black pepper while cooking egg noodles. Add in mushrooms, onions, cream of mushroom soup, and Sour Cream. Drain noodles and stir into sauce.

We found a recipe for Zucchini Boats that had chicken, nuts, mushrooms and onions bake in zucchini. It was a lot of work and the flavor was good, but as usual we wanted to improve on it. After a couple of tries we landed on the following recipe which has become a family favorite. 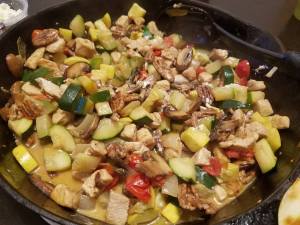 In a large cast iron skillet. Grill cubed chicken over medium heat. Remove from a pan. Saute onions until caramelized.  Remove from pan and add to chicken. Saute mushrooms. Return chicken and onions to the pan. Stir in zucchini and yellow squash and cook for 5 minutes. Add in nuts and tomatoes. Cook 2 – 3 minutes. Stir in 1 cup Goat Cheese just before serving.  Sprinkle with additional Goat Cheese when serving. We enjoy it with Pita Bread.

This is such a versatile mix. It can be eaten on its own, as a sandwich, or as a pasta dish. The inspiration for this dish comes from Musumeci’s Deli. Let me set the scene for a second. A good friend of ours that I used to work with first introduce me to Mucumeci’s Deli when we worked together. One day as we are going to lunch he suggest this little sandwich shop he knows. As we drive to the center of the city, passing by all of the big beautiful buildings he turns down an alley, and pulls into a small parking lot behind what appears to be an abandoned building. With a huge grin on his face he gets out and we walk in to the building. The lobby is full of tables and plastic lawn chairs, and to the side there is a small shop that has a line out the door and part way through the lobby. We get into the line and working our way into the shop, where my friend grabs some papers and pens off of the counter and says, “Fill this out correctly or you have to go to the back of the line.” The inside of the shop is basically a small kitchen, with microwaves, pots of boiling water, stacks of fresh sub rolls on at the back. Two men are working in the kitchen, the younger one one taking the orders and money, the older putting orders together. This turns out to be an Italian kitchen, in all that you picture with that, the two men were father and son both named Phil. The food ranged from the Musumeci Special (ham, turkey and cheese with all the fixings) to cheese manicotti with Colosimo’s Italian sausage, and everything was so good, even the Cherry Coke was adjusted to cherry perfection. Hidden in the menu was the sausage and pepper sandwich, green peppers and onions sauteed together, placed on their special sub rolls with either mild or hot Italian sausage (grilled and sliced lengthwise). No marinara or cheese added. Just the addictive goodness.

This became a standard for me and every time I would go with my friend the orders were the same One full Musumeci Special and one full Sausage and Pepper Hot. This is also where I was introduced to the savior of the lunch order quandary, “the Splitter”. Half of each sandwich swapped.

Okay so after years of going to Musumeci’s deli and being well and truly addicted to the Sausage and Pepper sandwich, the worst thing possible happened. We walk in to the deli and Pops and Phil tell us that the City informed them that they would not renew the lease for the shop and were closing them down. I took my family there one last time and said good bye to the best sandwich I have ever eaten… Until now.

Through the next few years I would get the craving and shrug it off. Then after years of getting the shakes and yearning for Sausage and Pepper, we determined that we would duplicate the recipe and like all of our recipes, many trial and errors later we came up with this. Now it is not perfect but it is really close!

Slice sausage and stir in to the pepper and onion mix.